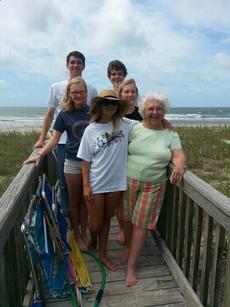 In 1934, Holden Beach had one road leading from the ferry dock to the “Old Hotel,” built by John Holden in 1925. It was this one road Catherine Thompson and her family traveled when she was but a few months old.

Catherine Thompson, 82, of Greenville, has been coming to Holden Beach with family members since she was an infant. Her most recent trip brought her back with family to stay at Perfect Landing, a home in the 700 block of Ocean Boulevard West. From back are Thompson’s grandchildren Hoke Thompson, Christian Rockermann, Catherine Grace Thompson, Mary Pat Thompson and Camille Thompson.

Now, 82 years later, she and her family are still returning to the beach they fell in love decades ago.

Catherine Thompso, of Greenville, was born March 10, 1934 in what is now Town Creek to David and Elizabeth Traynham, where her father served as a Methodist preacher at Zion Methodist Church.

“Brunswick County was just country in those days,” she said. “I had no electricity, and we had a pump out in the yard to pump water. We used what I called Aladdin lamps, and our windows had no screens.”

Thompson’s family did have one thing most in Brunswick County didn’t have at that time: a car.

“My dad and the doctor were about the only two people who had cars,” she said. “People traveled by wagon and mules.”
And while life may have varied for members of Zion Methodist Church, one event that brought them together every year was the church’s picnic every summer held in Holden Beach.

When Thompson was 18 months old, her family moved to Caswell County, near the Virginia line, but that didn’t stop them from still making an annual trip down to Holden Beach — a rather treacherous journey at that time, she said.

“We had to bring all of our provisions because there were no stores down there,” she said. “To get to Holden Beach, we came from the main highway, and there was one road that came down to Holden Beach, and that road was somewhere in the area of Stone Chimney Road (now), and it was all sand. There were two creeks that we had to drive through to get here.”

Thompson said the family was mostly able to stay in the ruts on the road created for them to drive on, but just in case the sand was too much, planks could be found on the side of the sandy roads to be slipped under wheels. Once the car was in neutral it could be lifted up and eventually freed from the earth’s clutches.

Once the arduous trip on land was over, the trip across the Intracoastal Waterway began with the car being pulled across on a ferry that operated on hooks and ropes.

What awaited the family during those days on the other side of the ferry ride was mostly wild land, save for one road that led to one hotel, known as the Old Hotel, run by Luther Holden, originally built in 1926, near the site of what is now Mermaid’s Island Grill.

Thompson said she remembered Holden selling small knickknacks on the first flood of the hotel on tiny shelves and food items including Saltine crackers and small sausages. An icebox held drinks for guests, with a machine to collect the caps off the bottles once they were popped off for customers.

Hotel rooms were small, with a bed and ironing board provided. A small kitchen in the building held a long table and benches for eating, an oil stove and another icebox. Water had to be pumped up to the kitchen through a wooden pipe. This pump also provided water for beachgoers who wanted to clean themselves; it was the only way to bathe. For restrooms, the hotel had two outside “Johnny Houses,” or outhouses.

Thompson said she can remember technology progressing at the hotel a few years later, in 1939, when Holden built a wooden tank to collect rainwater that could be used for bathing.

“He had a sort of system, and the idea was to catch rain and the sunshine would warm the water, so you could get the sand off with the water that was not as cold as the water coming out of the ground,” she said. “That was really a modern improvement.”

For entertainment, Thompson and her fellow young beachgoers, when not splashing about in the waves, also liked to play among the sand dunes.

She would also collect seashells and bring them back to put on shelves. Today, she has shelves full of seashells in her Greenville home.

“I (also) have glass jars filled with olive shells and some conch shells. They’re beautiful,” she said.

World War II stopped the family from returning to Holden Beach, but after Thompson married Methodist preacher Emerson Thompson and the two began having children, they began to discuss the possibility of returning to Holden Beach. The Thompsons and Emerson’s sister and brother-in-law, Betty and Alan Baldwin, and their children, Cathy Thompson and Al Jr., made their way back to the island in 1962 — this time by high rise bridge.

And this time, the family rented a good-sized cottage known as Blackman Cottage with three bedrooms and a bathroom that was indoors.

As the Thompson and Baldwin families grew, they continued their vacations to Holden Beach. Now Thompson’s three children, Cathy Thompson, Emerson Thompson III and David Thompson, with their own children — seven in all — try to continue the tradition to this day.

“I’ve enjoyed vacationing with my children, to see them grow and now my grandchildren (grow),” Catherine said. “And my brother-in-law and sister-in-law are just a couple of houses down. It’s just a good time … to get us all together. We love our family and we love the tradition of the children getting together.”

Catherine’s children shared their own memories of their family vacations to Holden Beach. Emerson III remembered being hired to sweep the sand from the mini golf area, but only for one summer because of how arduous it was. The three also remembered the sound the bridge connecting Holden Beach to the mainland would make when it needed to pivot apart to let pleasure boats through. Old Lyle’s Bait Shop provided them with bait and ice cream, which they would eat while watching boats go by. Surfside Pavilion provided a place for the kids to shoot pool or read magazines. An old Civil War Blockade Runner was visible during low tide, and they would watch people stand on the ruins as they cast their fishing lines.

In 1969 the family shelled out a fortune to rent a black and white TV to watch the moon landing, which Catherine said cost about as much as a house rental at the time.

While much has changed of Holden Beach, much is still the same, Emerson III said.

“Even though it’s grown, it’s kept its character and is the same culture now as it was back then, which is important,” he said.

The memories are now spilling into a new generation, with Catherine’s grandchildren sharing their own.

David’s daughter, 16-year-old Mary Pat Thompson of Kitty Hawk, said one of her earliest memories was running around as a 5- or 6-year-old in one of the Holden Beach homes the family rented as the fireworks burst in the air, and eating candy from Sandman’s Candyland under the Holden Beach Bridge.

“So that’s super fun, being with everyone,” she said. “Being down here fills you with memories of all the years past, and just getting to be with everyone. That’s the best part of coming to Holden Beach. We’ve been coming here forever—we’ve never deviated.”

“We would make the best sand cakes,” she said.
Mary Pat agreed, and said it’s nice to see all of her cousins and other family members, including Catherine, who everyone all calls “My Momma,” under one roof.

“Holden Beach is such a part of our lives,” she said.